As Downtown Louisville Changes, Check Out These New (Temporary) Views

Our city's core is changing, and Fourth Street -- where Louisville Public Media is headquartered -- is a particularly good vantage point from which to observe the change.

This north-south corridor was the commercial hub of the city back in the day. And along it, projects are going up and buildings are coming down.

Some of that activity is lending us views that we haven't seen in decades, if ever. And we're not likely to see them again.

Earlier this week, we took a walk down Fourth Street -- with a quick detour east to Second Street -- to document three of those unique views of our streetscape, skyline and architecture.

The 500 block of South Fourth Street -- once home to KentuckyOne Health offices and, well before that, department stores -- is getting a new, seven-story apartment and commercial building. The development from Capital Investment Group in Cincinnati is post-demolition and under construction, offering new -- and temporary -- views of the Speed Building (above), as well as a new look from Guthrie Street (below).

Everyone knows about the new Omni Hotel & Residences. By any measure, the new 30-plus story structure will change Louisville's skyline. But from the south side, take a look at how it also obscures -- and reveals -- other parts of our urban landscape.

Perhaps the second-biggest change to the downtown cityscape right now is the renovation of the Kentucky International Convention Center. About half the structure has been demolished, which -- if you're standing by the Old Spaghetti Factory -- has revealed a new look at one of our signature towers (above).

Walk west and look back, and you'll see a cluster of buildings -- including the distinctive Hyatt Regency and the new Omni -- from an angle we haven't been privy to before the demolition began (below).

And here, for good measure, is a north-looking view of some of Louisville's most-recognized buildings, minus the 40-year-old convention center. 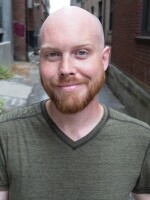 J. Tyler Franklin
Tyler is the photographer and videographer for LPM. Email Tyler at tfranklin@lpm.org
See stories by J. Tyler Franklin
Words for the People
Each episode features an established writer and an emerging writer, sharing their wisdom to help you free your own story. “Words for the People” is hosted by Crystal Wilkinson, Kentucky’s Poet Laureate.
Latest News
Related Content