Review: Baritone Will Liverman Dreams of a New Day

Praised for his versatility, vocalist Will Liverman’s stacked accolades speak for themselves. Liverman’s most recent endeavors include the Met Opera’s The Magic Flute, the role of Silvio in Pagliacci at Opera Colorado, and Schaunard in La bohème – just to name a few household names. He is known for delivering earth-shattering performances all around the nation. It’s no surprise that his upcoming recital album Dreams of a New Day is equally as epochal.

Set to release February 12, Dreams of a New Day is dedicated entirely to Black composers. Amongst forerunners like Harry T. Burleigh and Margaret Bonds, Liverman chose contemporary composers such as Damien Sneed, a commissioned work by Shawn Okpebholo (from Lexington, Kentucky!), and closes with his own arrangement of Robert Fariña’s Birmingham Sunday. In Liverman’s own words, “[right] now, it is more important than ever to celebrate the contributions of Black composers, and I’m honored to give voice to the art songs on this album… Black composers wrote so much more than spirituals!” It’s clear that each piece was chosen with careful intentionality to showcase the versatility of Black composition.

Liverman’s bright, expressive baritone captures you from the first note of Damien Sneed’s I Dream a World. The arrangement features cascading chromatic piano lines leading you to hope and back again. Liverman’s delivery is heart-breakingly honest, and as he pierces you with his phrasing, he implores you to feel every word. By track number 3, Liverman had already moved me to tears with the unequivocal longing his voice evokes as he sings the poetry of Adela Florence Nicholson in The Five Songs of Laurence Hope. Like freshly revealed sunlight in an otherwise cloudy sky, his baritone wraps you in warmth as he sings Harrison Leslie Adams’s Amazing Grace. The song is commonly mistaken for a spiritual but was actually written by a slave ship captain. Adams’s composition gives the voice to the enslaved Africans of John Newton’s version. The lyrics plead for hope, faith, strength, love, life, and peace.

Although the entire album had been striking so far, it was Three Dream Portraits composed by Margaret Bonds that stopped the show. Bonds was one of the first Black composers to gain recognition in the United States, remembered for her frequent collaborations with poet Langston Hughes. Margaret Bonds (nèe Majors) was born March 3, 1913 in Chicago, Illinois to a church musician mother and civil rights activist and physician father. Bonds studied piano and composition with Florence Price, and began her undergraduate career at the young age of 16. She earned both her Bachelor of Music and Master of Music from Northwestern University, where she waded through tumultuous years of racism and hostility. These formative years led Bonds to address racial issues in her own compositions, and she did much to promote the music of her fellow Black musicians.

Beginning with Minstrel Man, Langston Hughes’ text addresses the duality Black people must face in performance and life; always hiding sorrow behind a character separate from your own humanity. Moving into Dream Variation, the text wraps you once again in the beauty of hope coupled with ascending and descending piano chords that uplift you while simultaneously keeping you hanging in somber territory. The described dream jolts you to reality, as you come to realize its simplicities. With dreams of dancing in the sun and resting in the evening, both Hughes and Bonds address the things that those with privilege take for granted; the things often robbed from Black Americans. Liverman delivers the final line of the piece in a soul-crushingly vulnerable falsetto, “night coming tenderly, Black like me.” In American society, we are very rarely ever referred to as “soft,” “tender,” or “gentle” due to societal norms coercing the majority into perceiving Black bodies as threatening. Liverman’s choice to include these works alludes to the fact that society has not changed since Hughes first wrote these words in 1926. To close, Bonds employs pointed, menacing piano lines to perfectly paint the text in I, Too. The composition compels you to feel the chaos of being a Black American, unloved by the country you carried on your back. Liverman impeccably interprets the works of both Bonds and Hughes, imploring you to understand Black America’s collective suffering.

Three Dream Portaits is followed by Thomas Kerr’s Riding to Town and Shawn Okpebholo’s Two Black Churches. Once again alluding to the parallels in our nation’s cyclical history, Two Black Churches serves as a musical altarpiece, honoring two different devastating moments in American history – the Birmingham church bombing of 1963, and the Charleston church shooting in 2015. Pulling elements from contemporary art song and Black gospel, Ballad of Birmingham is remarkable and longing for freedom. Moving through to movement two, the piano in The Rain makes you feel as if you are face to the sky, with freezing cold drops hitting you with every note. The text, specifically written for this composition by Marcus Amaker, lays heavy in your ears using lines such as “taste the salt of our surrounding gloom” and “face the rising tide of Black pain.” The piece washes over you, trapping you in its ocean of sorrow. Two Black Churches is expertly followed by Robert Owens’s Mortal Storm, Op. 29. Also using a selection of poems by Langston Hughes, each piece is rushing, frantic, and desperate, leaving you feeling as if you are out of breath from outrunning an invisible, oppressive force.

Will Liverman’s arrangement of Birmingham Sunday (Robert Fariña) feels like the final exhale from a breath held in our chests for generations. The musical background is brilliantly optimistic, juxtaposing lyrics that memorialize the 16th Street Baptist Church bombing. In 1963, the catastrophic event took four lives – each named in the piece. “I can’t do much more than to sing you a song.” As Black people, we gnash and fight, but in the face of a system unmoved and history unchanged, we keep singing of freedom. Much like birds in the trees of a crumbling world, we sing. With the repeated closing line “the choir keeps singing of freedom,” Liverman poignantly concludes the album, reminding you that the fight is not over. We are far from equal.

There is much uncertainty surrounding how to properly represent the vast offerings of Black musicians while avoiding generalization and exploitation. Liverman accomplished his mission to showcase the versatility of Black composition, while breaking through the barriers of an otherwise oppressive artform. Dreams of a New Day faultlessly captures the Black American experience, past and present. 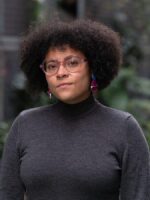 Kiana Del
Kiana Del is the Engagement Manager for Music Education for LPM. Email Kiana at kdel@lpm.org.
See stories by Kiana Del
Words for the People
Each episode features an established writer and an emerging writer, sharing their wisdom to help you free your own story. “Words for the People” is hosted by Crystal Wilkinson, Kentucky’s Poet Laureate.
Latest News
Related Content