With 500 'This American Life' Episodes, Ira Glass Shares His 10 Favorites

With our 500th show approaching, people keep asking me about my favorite episodes over the years. Here’s a short list.

Some are listener favorites:

Harper High School One and Two

The Giant Pool of Money

Somewhere in the Arabian Sea

I love how funny and human-sized everyone is in this show. It’s a surprisingly funny show about the war on terror.

The structure of this show — where the whole episode you wonder how a mom could know for decades she was raising the wrong baby and finally, she answers it in the end — is perfect.

The standout story is Starlee Kine’s essay on breakup songs, which includes an interview with Phil Collins that’s so menschy and real, it changed how I saw him forever.

Especially the interview with Myron Jones, which is the best interview I’ve ever done, mainly because he had so much grace and humor talking about his past. Any question I could think of, he’d come back with an amazing story, which is rare.

David Segal takes a turn in the middle of this story that’s one of my favorite reveals in any radio story ever.

How can you go wrong when the central figure in your story is funny and cantankerous and bighearted and idealistic and utterly pragmatic and on top of all that, totally charismatic? If you don’t know who Harold is, be prepared for a treat.

Carlton Pearson, like Harold, is someone they should make a movie about, for lots of the same reasons. An idealistic preacher whose idealism costs him pretty much everything: the church he runs, his reputation, his fortune, nearly his family.

Some shows are favorites of mine for purely selfish reasons, because making those episodes meant something special to me. For instance, putting together the memorial show for David Rakoff, or visiting David Sedaris in Paris in 2000, or having my mom on our first episode in 1995 (she died in 2003), or playing old tapes of my dad as a radio deejay in his 20s, or visiting Georgia over and over getting to know people and trying to get them to speak on the record about a small town judge, or getting a chance to talk about marriage at the end of the Rumspringa relationship story in What I Did for Love, or going to Medieval Times with a Medieval scholar I really liked, who’s since passed away, Michael Camille, or devoting an entire hour of radio to my own neighborhood diner. Those shows:

Act One, What I Did For Love

24 Hours at the Golden Apple

Then there’s the Christmas and Commerce show, which has David Sedaris’s Santaland Diaries in it. That story – first on Morning Edition and then on This American Life – was his first time on the radio and our first time working together. Putting it on the radio changed my life as much as it changed his.

It’s hard choosing favorite shows when you’ve made so many. It’s like, you love different episodes for different things. On our website we have lists of favorites, a short list of seven, a longer list of 62, and then – if that weren’t enough – a third list of eleven very early shows. And sure, it’s lame that we can’t just come up with a succinct list of three. But when you’re working on a show where the whole point is that you’re only putting stuff on the air that you really really love, you end up with a lot of shows you feel very strongly about.

This American Life airs on WFPL at 1 p.m. Saturdays and 4 p.m. Sundays. 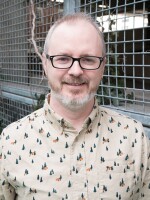 Charles Spivey
Charles is the VP of Operations and Technology at LPM. Email Charles at cspivey@lpm.org.
See stories by Charles Spivey
Words for the People
Each episode features an established writer and an emerging writer, sharing their wisdom to help you free your own story. “Words for the People” is hosted by Crystal Wilkinson, Kentucky’s Poet Laureate.
Latest News