Barton is currently a news reporter and All Things Considered Host at NPR member station KWBU in Waco, Texas. He previously worked as a reporter and producer at KUT in Austin.

Barton has reported on state politics and government in Texas. His work has taken him from the Texas capitol to small towns and cities around the world, covering issues such as drought and water shortages, as well as the forced relocation of communities in rural China and the rise of luxury cars in Beijing.

He has also covered breaking news such as the 2014 shooting at the Ft. Hood Army base and the aftermath of a fertilizer plant explosion in West, Texas.

“We are excited to welcome Ryland back home to the Commonwealth. He brings a wealth of reporting experience back to Kentucky and I know our audiences will appreciate his contributions to Kentucky Public Radio,” said KPRN Chairman David Brinkley.

He starts his new job in Frankfort next week. 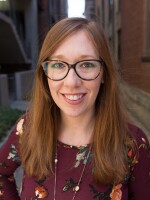