The heat index in Jefferson County reached 105 degrees by noon Monday — and it’s only getting hotter.

More than 50 million Americans face scorching temperatures as a heatwave spreads over most of the country this week. Louisville could see heat indices as high as 115 degrees, putting many residents at risk of heat illnesses.

Every year, more than 600 people die from extreme heat. Dizziness, muscle cramps and vomiting are telltale signs it’s time to cool down, according to Zach Harris, medical director of emergency services at Norton Hospital.

“If you’re so hot that you start to not feel good, that’s the right time to go inside or find some shade or some way to cool down,” Harris said.

Older adults, young children and people with chronic illnesses are most at risk, but even healthy adults can experience heat-related illness, according to the U.S. Centers for Disease Control and Prevention.

Harris said people should find air conditioning or take a dip to cool off. In and around Louisville, pools and libraries are accessible places to escape high temperatures.

“Your body primarily cools itself down by a combination of sweat or wetness and wind — what we call evaporative cooling — and that’s the most effective way to cool someone down,” Harris said.

Some organizations are offering free “cooling centers”— air-conditioned, indoor locations where residents can get relief from the heat. The CDC reports that individuals who spend time in cool areas like these are less likely to suffer from heatwave mortality.

Here’s a list of Louisville Metro cooling centers, according to Metro United Way and the Town of Clarksville:

Hours of operation and contact information for each site can be found here on the Metro United Way website. Public pools and spraygrounds can be found on the Louisville city website.

This story has been updated to include information about additional resources. 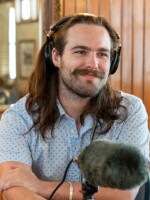