On The Guestlist: Kamasi Washington And Cameron Esposito

I sat in a very tiny car with the larger than life saxophonist Kamasi Washington and talked about his musical journey and how it feels to be a jazz ambassador. Comedian Cameron Esposito gets into what she has in common with Sally Bowles and why she decided not to become a Catholic priest.

By the way, that Kamasi Washington record is still cracking open my brain on the regular even though it's been out a year and a half. If you don't own it, you should fix that now. 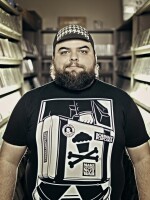